On 9/11/2015, I went to NNYFW, not a typo, Naomi’s New York Fashion Week. This time of year in NYC there are a many fashion shows, and some regular people like myself can attend. I hopped on Megabus, for a relaxing trip to NYC having just worked 3 weeks straight to have this full weekend off. Initially, it was a great ride, I was snap chatting (@dastang6) and everything!  But flashbacks of the true 9/11 overcame me when I saw the island of Manhattan from Jersey.

I was in grad school at that time. I thought here I am thinking about fashion shows, when it was the anniversary of such a tragedy.  When I arrived to NYC and was unsuccessfully attempting to catch a cab, I looked around at the myriad of New Yorkers going about their everyday lives. I still remember the aftermath, our army lined the streets, subways, tunnels, and train stations with AKA 47s.  Now the city is seemingly unphased. Always remember, I thought, but don’t live in fear.

Finally I caught a cab downtown to Sheraton Tribeca on Canal Street, which was fantastic but absolutely no where near any of the shows I was going to. I quickly threw on my BCBG Maxazria dress,

which I realized I always needed my daughter to help me zip up, but I was flying solo, so had to dislocate my shoulder to get this dress on but, Worth it!

My struggles to catch a cab continued. A lady felt bad for me a hailed a cab for me, was it my dress that made the cab drivers ignore me? Ill never know. As I was riding the cab to midtown I saw the World Trade Center with a beacon of light emanating from the top.

Check out my NNYFW outfits!!

I arrived in Midtown to the The Cutting Room 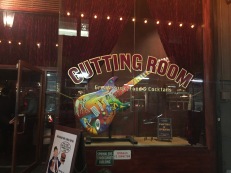 which initially I thought was unusual show venue, it was large dining club area, and the lounge/VIP are was on the second floor.  But nonetheless, I was excited about my Day 1 of NNYFW, The Uomo Moderno Fashion Show!!!

The show did not disappoint. Definitely, fashion outside the box.  The Cutting Room is an upscale yet relaxed nightclub atmosphere where the models runway included meandering around the people as they dined.  The food was excellent too! The editor in chief of the magazine was hilariously animated. There was a live strings orchestra (which is my fav because I played violin) called 4Strung, and there was an amazing Marilyn Monroe skit by New York Conservatory of Dramatic Arts.

The designers were spectacular, Wywol was having fun with denim, making it glossy, ombre, with a lots of pop! And who doesn’t love an sustainable fashion, like DueDiLatte, whose clothes were made from milk protein (casein). I was totally smitten by Francesca Marotta haute couture.

It was definitely a most perfect first night of NNYFW on an imperfect day in one of the most resilient cities…believe it or not day 2 was even better…So stay tuned!