So it’s hard to celebrate when work schedules do not permit. On our 5th wedding anniversary (Shout out to us!), I was working 12 hr nightshifts and hubs was working during the day.  Since this is pretty normal us, usually happens once a month, we vowed to try to go out together soon.  We exchanged gifts when I got home from work Saturday morning before he went to work.  The theme was wood, as usual Brent, made my gift look just dumb. He got me a carved cutting board, and we’re just not even going to discuss my weak gift, lol.

Hubs seemed pretty satisfied with yet again destroying me the gift department, and I felt bad vowing to do better next year.

*Just to give you an idea of how stellar he is; 6 yrs ago on Christmas morning, he proposed to me with build-a-bears, dressed with a wedding gown and tux; and I gave him UGG mocassins 😦 *

Apparently our lackadasical attitude was unacceptable to my mother-in-law, and rightfully so.  We’ve been bogged down with life stuff,  kid’s tuitions, baby on the way, new house search… Still as she said so eloquently to me,” that’s no excuse.” So she bought us a Fogo de Chao (brazilian steakhouse) gift card, which also so happens to be our 1st anniversary spot.

2 weeks later, despite the fact the opposite work schedules again, we went on a hot date to Fogo.  To maximize my experience of salad perfection, and fine meat galore, I only ate cream of wheat that morning, oh my stomach was going to be sufficiently empty to take it alllllll in!

If you haven’t been, and even if you’re a vegetarian, I highly recommend Fogo de Chao.

It is an upscale experience, and somehow made fine dining and buffet synonymous.  In Baltimore, ours is located in the Inner Harbor downtown, right near the water.

How it works: Once you get seated, you’re served drinks of your choosing, then you can immediately start at the beautiful salad bar.

Everything looks so fresh and crisp, you almost dont want to touch it and ruin the display.

Then once seated again, you get a circular card, green on one side and red on the other.

If green side up, the “gaucho” will continue to bring various meat dishes  around, slice the amount you request, and move along. Red side up, means you need a break or you are incredibly full. 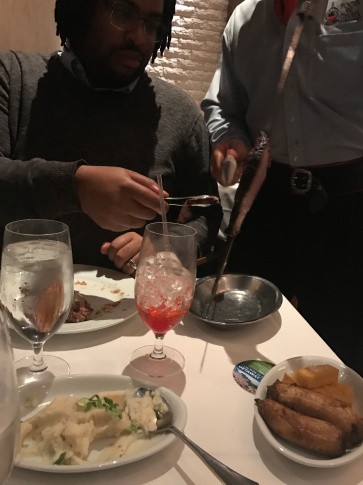 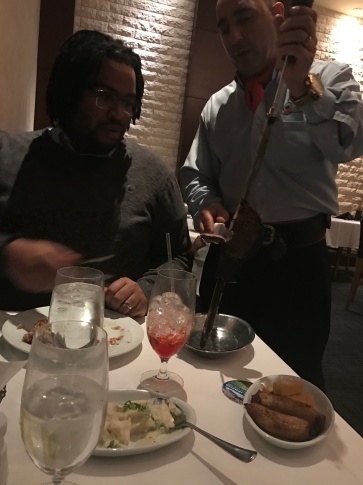 My favorite is the bacon-wrapped anything lol.

Of course, made room for dessert!

So, sufficiently full, we made a pact to do better, make time for each other. Then we rushed home because the teenager was watching her little brothers and had to study for a big test in the morn.