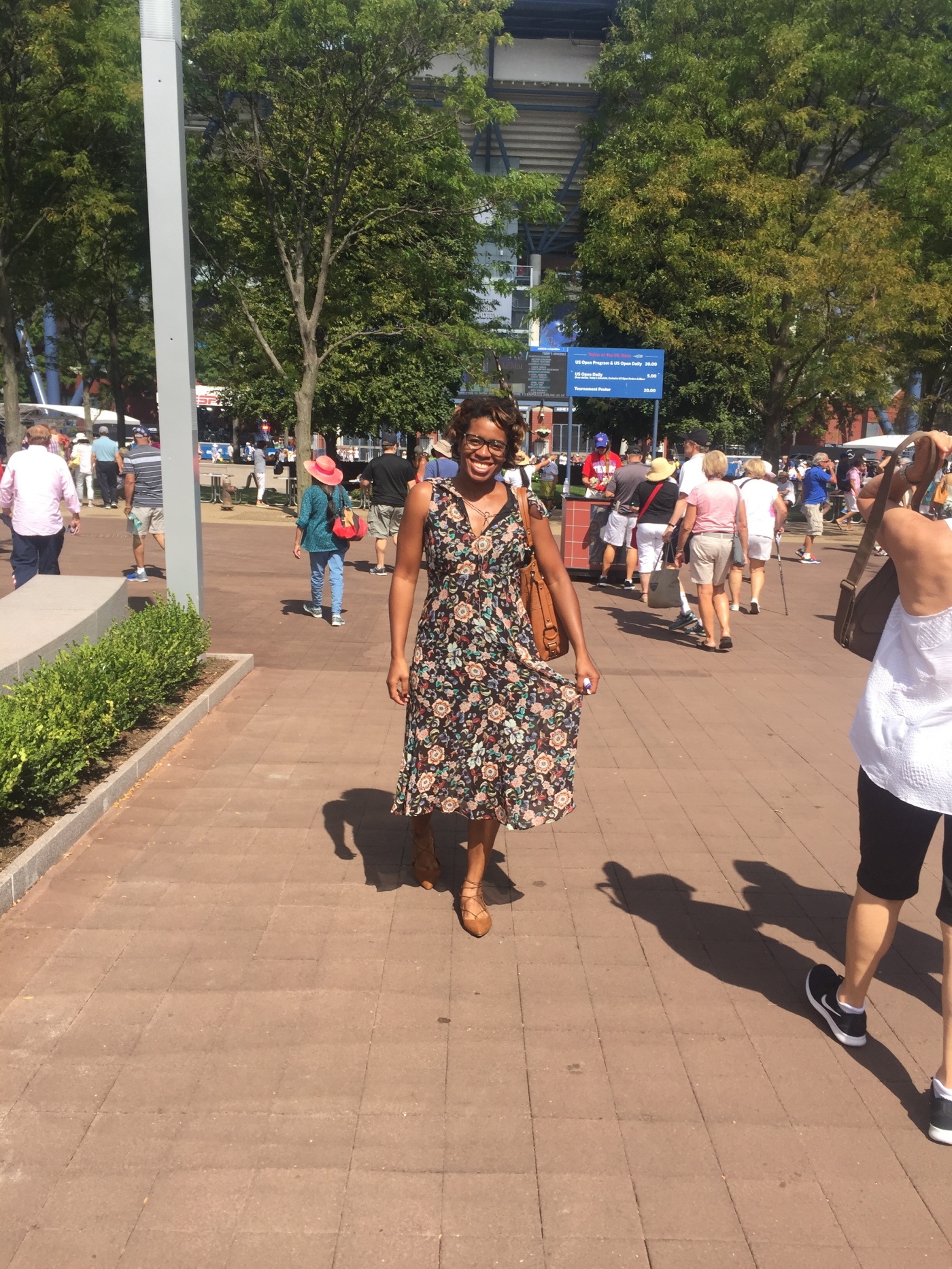 So I only had one day off in the next two weeks, the moons were aligned aka I had child care, and I decided “I’m gonna do it,  I’m going to the US Open.”  Now, I admit I have a bit of an obsession.  A quiet one, though.  We only have one TV in the house, so usually I watch either late nights (or super early morning if there’s an Open I can watch live) on Tennis channel.  I honestly probably watch tennis everyday. Like Everyday.

That being said, I’m blessed to be a wife, mother of 3 and have a career in the medical field working 70-90 hrs a week, which leaves little time for me.  So, occassionally I take a “Me Day.”

So, I have been 2 other times, both in the 2nd round, one session with my hubs,

Where I still remember pleading that we stay until the next day so I could see Roddick’s potential last match.  He reluctantly obliged.

The next year, I went with my daughter, met my best friend up there,

I had hubs drop me off at the Megabus stop, caught the 620am from Baltimore, MD to NYC!

I thought I’d sleep on the way, because I worked 10 hrs the previous day and was up late watching Madison Keys. But couldn’t sleep a wink. I lived in Manhattan for a couple of years in grad school so I sorta remembered my way around.  Caught the 1 train to Penn Station.

Stopped for a moment to hear a beautiful violinist, then hopped on the Long Island Railroad to Mets-Willets Station. 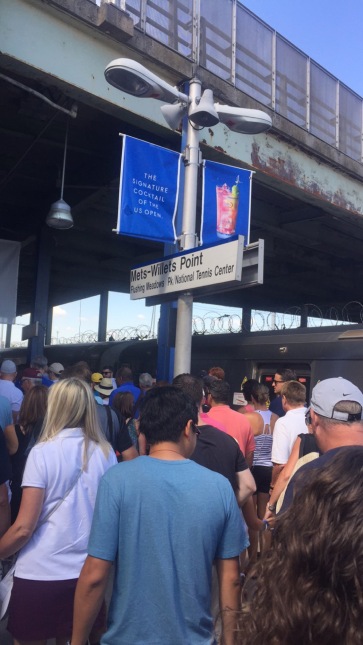 Despite No Federer, No Sharapova, No Vika; Serena and Nadal played the day before, my excitement was hard to contain. If you followed me on Snapchat, it would explain it all. 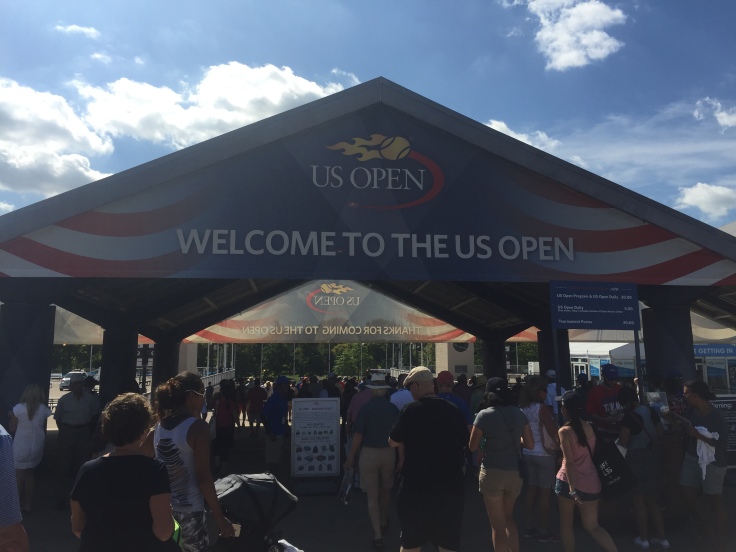 It is key at the US Open to dress fashionably chic but comfortable. Now I stood out a bit, wearing a Zara floral dress to the land of khaki shorts/tennis skirts and polo shirts, but it was lightweight and perfect!

Immediately, I went to the app to see who was playing and tried to maximize my time. I felt my “tennis schizophrenia” welling up inside, I wanted to see everyone that was playing, but had to tell myself only one set each.  I knew to get an Arthur Ashe ticket so I was free to go to whatever stadium I pleased.

I had never been there so early in the tournament where basically every player was in town. And this year, those players that weren’t playing I realized I could be up close and semi-personal by watching them practice.

Now, since I watch Tennis Channel I know food is critical to any Open, so I started off with a Korean grill Bulgogi bowl

and took it to see the great Ana Ivanovic in Louis Armstrong Stadium. Watched a set. Then went over to see Grigor. 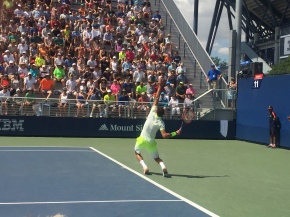 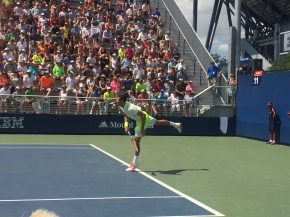 You’re just sooo close to the action its insane. I felt Grigor was in good hands and I knew Kei was playing at the same time over at Grandstand so I had to make a quick dash over there.

At that time of day the sun is well, memorable.  It was pretty packed at the Grandstand so I was kind of high up, at one point it felt like the sun was in my lap.  And when that happens just sip on your Evian and pray for some wind, lol.  After Kei, I went over to the practice courts.

You know, just standing a few feet from some of the greatest players in the world. Venus. Bryan Brothers. Gael Monfils. Kuznetsova. And peeked over to watch the “next big thing” of tennis, the young & talented Alexander Zverez.

I kept checking the scores of Arthur Ashe to see what Stan and Verdasco were up to.  I went over to see Eugenie play Siniakova on the Grandstand, who I know from watching her on TV to be a fireball. But she was super focused and definitely executed her game.

I never did find Stosur, I just couldn’t figure out where the old grandstand was. But my ultimate plan was once I got to Arthur Ashe Stadium, I was gonna stay there. I kinda wanted to see Wawrinka, so I went in, had a great seat in section 103, with wonderful neighbors. And I’m going to tell you I find the stadium is magnificent, slightly intimidating at first (I’m shy), but for sure, epic!

I watched a couple of games and decided, to try to catch Serena on the practice courts. As I was walking I realized Fabio Fognini was playing, and he is such a character so I definitely had to go see him, he was so skillful!

Finally, I thought you know what? I’m ready to sit down. I had honestly been walking around from 11am to 4pm.  I headed back to Arthur Ashe Stadium, finally got the signature cocktail, the yummy Honey Deuce

And went to hang out with my new friends in section 103 and watched Venus play.

My moment of rest was short-lived, because I had to get back to Manhattan to catch the 8pm Megabus home.  As I was leaving, I got my daughter a US Open shirt, my sons a big Wilson tennis ball (which I regretted lugging back on the LIRR and 2 subways lol) and my husband a mug.

One of the most amazing things about the US Open, is being surrounded by kind people from all over the world joined together by the love of the game.

There’s just so much to do there, I recommend to everyone, not only tennis fans. I’m so wide-eyed every time not only because I’m a girl from inner city Baltimore who can’t play a lick of tennis. But I’m so in awe of such amazing athletes who have found the ability to be inspirations to people of all ages, cultures and ethnicities.

Now, I’ll be back up in 9 days to provide press coverage some of NYFW, debating whether to go back for the finals… Sounds like a no-brainer, huh?